DISCLAIMER
“The content of this website is mine alone and does not necessarily reflect the views of the U.S. Government, the Peace Corps, or the Namibian Government”

Yesterday the dogs that my hosts family owns ate my jeans.

I wasn’t in them at the time.

To be clear, they chewed a hole about the size of saucer and several smaller holes into my favorite pair of jeans which where hanging outside to dry.

It wasn’t a vicious act, the alpha male actually likes me and I believe he was welcoming me into the family. Dogs don’t speak Afrikaans and can barely manage a hand (paw) shake, but they can chew. So I take it as a small kindness that the pups decided to gnaw while my jeans were on the clothesline and not on my person.

It’s all part of the adventure.

One that same day the bulb in the ceiling light of my room literally exploded when I flipped the light switch on. The lamp is enclosed so no glass shards on my bed to deal with. Another small kindness.

On Saturday I ate goat, chicken, fish, some Mopane worms, sausage, and more in a cultural exchange cookout. It was a lot of fun for the people attending, not for the goat and chickens which were killed, dressed (as in to prepare to cook not as in to wear a tux), seasoned and rendered tasty by several local cooks following traditional recipes. There were side dishes of local collard-like greens, boiled seed that tasted very much like boiled peanuts, and many other foods from Afrikaans, Oshiwambo, and other households. I ate until I couldn’t anymore. ( Yes, I did eat Mopane worms. They’re kind of chewy and have a somewhat nutty flavor.)

What I DIDN’T eat, but are everywhere are large bugs called Armored Crickets or Armored Katydids. These dark red to brown, slow moving insects are about the size of a large walnut with spindly legs and thick, spiked exoskeleton. They eat pretty much any protein they come across including dead Armored Crickets. 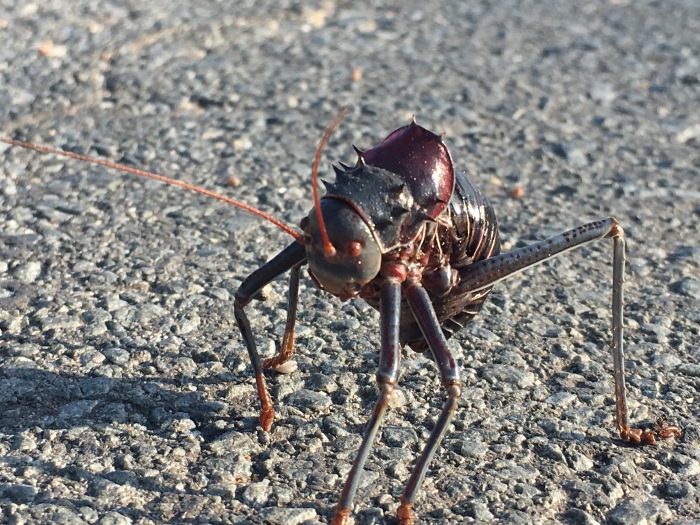 Did I mention that they are everywhere?

There’s so much to tell you about and so little time to do it. I’ve already been in-country 3 weeks and I still have so much the learn. Things should slow down in 6 or so weeks.

13 thoughts on “Namibia: It’s all part of the Adventure”