Namibia is a land of contrasts. It’s dry for most of the year here in The Namib Desert if you don’t count the fog that occasionally rolls in from The Atlantic. Most days where I am it is sunny, breezy and warm. Not overly warm, the heat felt elsewhere in The Namib is moderated here by the cool ocean winds. There are the few days a year, sometimes only a few minutes a year, when there is rain.

Fog on the beach in Swakopmund

As luck would have it, I missed the rainfall that dampens this area for two years in a row. I was traveling up in Oland last year. This year the rains came early, while I was on a trip to Windhoek. Friends texted me about the weather I was missing. The air in Windhoek didn’t look particularly promising for precipitation, but when I went to sleep that night I could smell the rain in the air.

I woke to a cool cloudy morning. I made coffee and took a look outside my hotel room and noticed that the ground was wet. Steel grey clouds hung low and moved sluggishly through the hills nearby.

As I watched, a light drizzle began and slowly got heavier. The shhhh of the many raindrops hitting cars and roofs and trees was soon accompanied by a symphony of drips and plops of water from those surfaces. Then, as if God wanted to add a finishing flourish, a single blue-white strobe of lightning flashed followed by a deep rumble of thunder.

Just as slowly as it had begun, the downpour slowed to a drizzle, then stopped.

“The wild dogs cry out in the night
As they grow restless longing for some solitary company
I know that I must do what’s right
As sure as Kilimanjaro rises like Olympus above the Serengeti
I seek to cure what’s deep inside, frightened of this thing that I’ve become”

My colleagues and I had two meetings to attend. The morning had promised more rain, but that promise was largely unfulfilled. The sun broke through the clouds, warming the streets and turning the cool, damp air into a steam bath.

With our meetings done, we headed back. We took the B2, The Trans Kalahari Highway, towards Swakopmund. The sun followed us and it looked as though the rains I saw in the morning would be all there was. But as we approached Karibib the weather changed. Ahead of us was a storm that darkened the horizon. Several flashes of lightning flickered through the clouds around us and the wind grew stiff and cool. 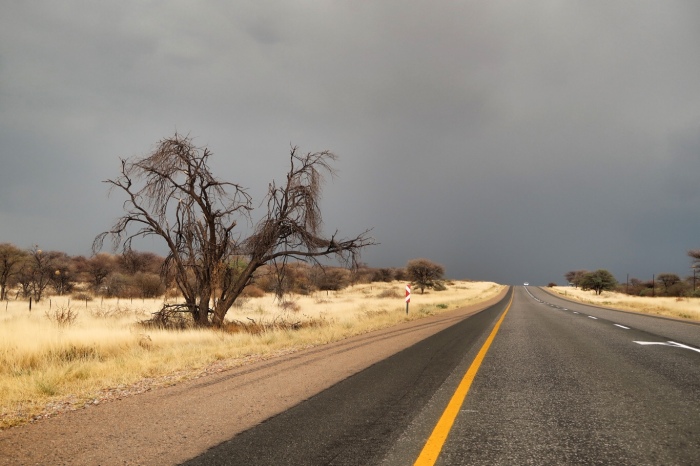 We drove into a downpour. There was so much water that the parched sand couldn’t absorb it fast enough and large puddles, some could easily be thought of as ponds, formed. By the time we got to Karibib the heaviest part of the storm had passed, but the water it left behind told just how serious the storm was.

The main street in Karibib was flooded, in places it was knee deep. Towns in The Namib aren’t designed to manage water and as we drove through we could see streams of water cascading down from the hillsides, adding to the pools we drove through. 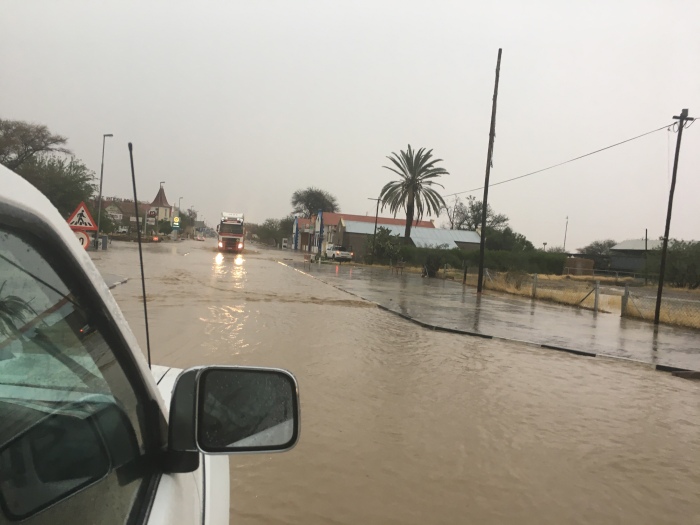 As we drove towards Usakos the clouds had broken and blue could be seen through the grey. A light drizzle followed us for a bit then gave up the pursuit. We stop at a station outside of Usakos to stretch. I looked back at the passing storm and found a rainbow arching over the mountains.

The rain has passed

10 thoughts on “God Bless The Rains Down In Africa”