Laura, a friend and fellow PCV, was grousing to me one Saturday. “Every time I get in line at the ATM the people in front of me insist that I go to the head of the line,” she lamented. “It’s like they’re afraid I’m going to fall over dead before its my turn.”

Laura is in her mid-sixties and keeps in shape by doing a weird aerobic two-step while wearing headsets and singing to whatever tune only she can hear. The exercise helps to keep her body on par with her extremely sharp mind, and keeps the local children entertained.

“It doesn’t matter how much I protest, they won’t take no for an answer. I guess I’ll have to live with it,” she concluded.

The “they” she referred to are the people of Namibia. They are the Herero, San, Nama, Ovambo, Colored, Basters, Whites, and the dozens or so other tribes and sub-tribes that inhabit this country. Their cultures and histories intertwine and are as diverse as their languages and appearances, but they all share a deep seeded respect for those they believe have been around a while.

I’m also in my mid-sixties, though time and life has been kind to me physically I’m starting to hear “Papa” or “Tate Kulu” associated with my name. These are titles of respect for older folks, though I guess they don’t respect me enough to usher me to the front of the line just yet.

I’m finding that Namibians view older people differently that we do in America. Back home everything is youth focused and advancing in years is something to be continually fought. We can’t do anything about the passage of time, but we’ll be damned if we have to look like it! We envy the smooth skin and firm bodies of the young and when we see seniors who have become comfortable with themselves we assume they’ve just surrendered to nature, they’ve given up the fight.

Here in Namibia, that you’ve been around a while seems to be cause for congratulations. Life here is naturally tougher, but its also hard due to created conditions. That you’ve managed to dodge death for so long means that you are either very lucky or very smart, and both should be respected.

But there seems to be more to it than finding ways of fending off one’s eventual demise. Namibians seem to understand that the longer we’re around the more we are changed. Our experiences make us different as we go through them. Some changes are subtle while other are fundamental, but that we are changed is the key. And the changes accumulate, they are integrated into ourselves so that we become something more than what we were. So, here, the passage of time isn’t just aging, it’s maturing.

That concept is applied to everything. For instance, in America our cheeses are ‘aged’, here they are ‘matured’. The flavor of matured cheddar is bolder, the color is richer, the smell is more pungent. It’s the way cheese should be experienced.

There’s a matured (2014) South African pinotage that I’ve found that, unlike younger pinotages, is smooth and flavorful, and relatively inexpensive. It’s become my ‘house’ wine.

You may not find it Stateside, but if you do, get it!

It’s not just things, time and experiences enriches one’s ability to produce as well. Music expertly played on real instruments sounds far more intimate than the throbbing beats of canned tunes DJs push out. Shoes made by sewing leather soles to leather uppers seem to mold themselves to your feet, something plastics can’t do. Jewelry designed and painstakingly made by artists carry with them a bit of the creator’s soul. These and more require skills one only gains through time and experience. And the same is true for those of us who can truly appreciate them, us matured folk.

Earrings being crafted by a local artist

It could be that my time here in Namibia is forcing me to slow down a bit and see things through matured glasses. It could be that what I’m experiencing is just what everyone goes through when they’ve packed on a few years. I’m thinking it’s a combination of both.

In my last post I talked about how dry The Namib Desert is. I didn’t fib, The Namib is, indeed, one of the driest places on earth, and dust is literally everywhere. But dry is a relative term.

Winters in Florida are ‘dry’, but there it means we get rainfall maybe a few times a month and the average relative humidity hovers around 40% instead of raining five or more times a week with humidity hanging above 80% in the Summer months.

In the Namib humidity can get as low as 10%, but that really depends on where you are. Coastal regions will get fog so thick that clothes left outside to dry can come back wetter than when you first hung them. When the conditions are just right the dry desert wind stops and moisture soaked breezes from the Atlantic will push inland, sometimes up to 100km, blanketing parched sand and rock with an almost viscous layer of fog. This may occur 2-3 times a month with moisture ladened air, not enough to form fog, wafting in a bit more often. It’s hard to predict when it will happen.

Nights in the Erongo Region are usually crystal clear. It’s amazing that there aren’t more optical telescopes here because the skies at night are so full of stars it looks unreal. The Milky Way is easily visible, there are so many stars that constellations are tough to make out.

Yesterday I thought it would be a good idea to climb Mt. Arandis and stay until after dark to get some night shots of the skies. I bought a nice little tripod for my Canon GX-7 Mark II, a head lamp, a snack and some water and set out, timing my climb so that I could also catch the sun as it settled in the west.

I did this alone. (Do NOT try this at home boys and girls!! I did tell people where I was going and was in near constant contact the whole time, but it is still not a wise thing to do.)

I’d climbed the small mountain before so I knew the paths and felt confident I could pick my way down in the dark with the help of my head lamp.

As I ascended I noticed that, of all nights, last night was one of those misty-but-not-quite-a-fog nights. I could see the heavy air as the orange sun settled behind it. I wasn’t sure that I’d be able to see many stars or even the Milky Way given that the peak I was on was only 600 feet above the desert floor, but I stayed and took photos. Here are a few. 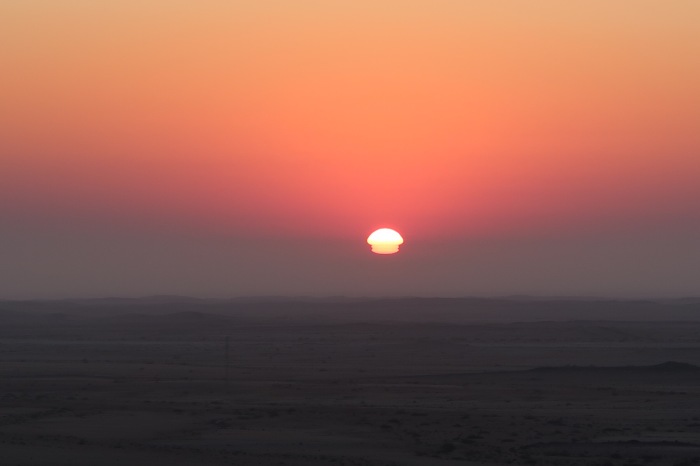 The sun setting behind a thick mist from the Atlantic

B2 Highway and part of Arandis after sunset

In that last shot you can see how thick the air was over Arandis, clear just a few hundred feet up.

As it grew darker I became aware that things look a lot different with just a small spotlight for illumination. I stayed anyway, waiting until it was dark enough to see the Milky Way. I got lucky and was able to capture a shooting star. 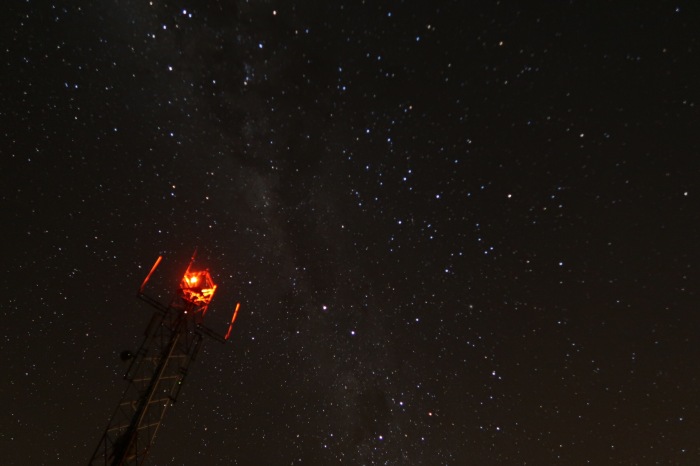 OK, photos taken, now I have to climb down in the dark with no defined path to guide me. It was slow going and the wind can make you hear all sorts of things, stoking the imagination.

I made it down without incident, but still had a 40 minute walk in the open desert with nothing but my little head lamp to guide me. I kept wishing I had bought a brighter light…, and a shotgun.

I focused on the red light of a mobile phone tower in the distance, a familiar landmark. My pace was a quick one and all the while I kept feeling like I was a extra in the SciFi movie, Pitch Black, waiting for the spot in the script where one of the monsters would swoop in out of the darkness and make a meal of me, and not even Vin Diesel could save me.

I’m happy to report that no monsters, lions, or even an ill tempered gecko bothered me. While the shots are not perfect they aren’t bad and are worth the adrenaline rush.

I may try it again, and maybe the next time it’ll be drier, and I’ll have a brighter light…, and a maybe a baseball bat. Just in case.