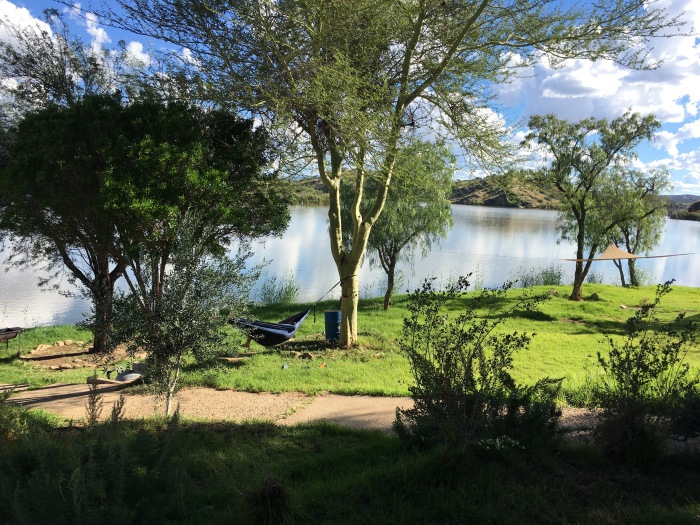 It’s Saturday, April 15. I am sitting in the covered courtyard in the Penduka Compound a few kilometers outside of Windhoek, Namibia. The skies are blue with big cotton candy clouds, there’s a light breeze that takes the edge off the warmish sun, and there are white pelican cruising the nearby lake.

After traversing two hemispheres (horizontal and vertical) and sitting through several days of lectures, exhibitions and even more shots (1st Rabies, and meningitis), we (Peace Corps Volunteer Group #45) have finally got some downtime!
To say it’s been a busy week would be a gross understatement. We arrived Monday afternoon and after brief introductions our Peace Corps hosts fed us and put us to bed. We hit the ground running on Tuesday with meetings from 8 am to 4:30 pm where we were introduced to the local Peace Corps Staff and given our training schedule for the next 3 months. Wednesday and Thursday was more of the same. Friday was a bit slower. We got the first of 5 sets of shots and were interviewed for potential assignments.

Today, however, was much different.

The Penduka Compound was created for and run by physically and economically disadvantaged women. It provides a workplace and income through a variety of projects and programs. The Compound is at once, an inn by a lake complete with 4 rental cabins and 6 backpack cabins, workshops for producing textiles, glass bead jewelry and pottery, small scale poultry and hydroponic farm, and a small events venue. It’s a beautiful setting and in the evenings, after the meetings we got to enjoy fantastic sunsets and star filled night skies. 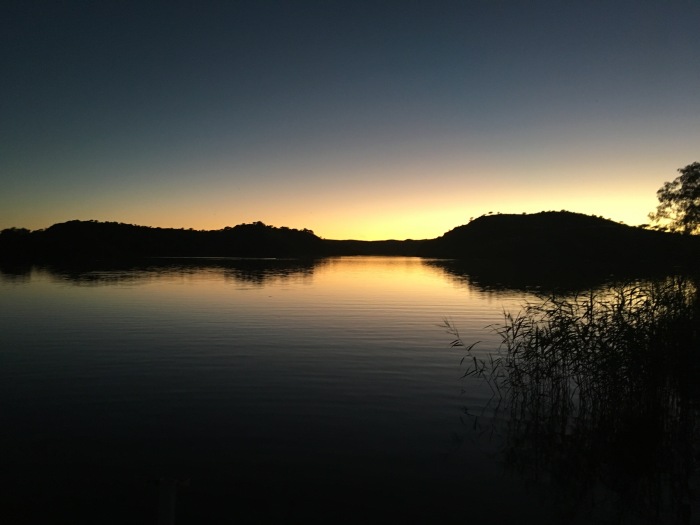 The problem is that the Penduka Compound is kilometers away from Windhoek proper and is surrounded by wilderness and an unsavory area. So, our hosts have insisted that we stay in the compound. That changed today. We were loaded onto buses and taken on a tour of some of the impoverished areas, then to a mall that would be the envy any American location. It was an interesting experience.

The shantytown we drove through looked like what I’m sure many of you have seen in the movies and media. Densely packed dwelling made mostly of corrugated metal that seem to adhere to no urban planning ideology stretched for kilometers, yet there seemed to be a certain level of normalcy about it. There were vendors in open air markets and metal covered shops plying every conceivable trade, children played in dirt lots, and here and there were attempts at beautifying or shading a spot with trees. Poverty was definitely a problem, but it appeared that people were making do however they could. We didn’t stop to have a closer look, maybe no purpose would have been served by doing so, still, I would have liked to understand what I was seeing better. I may get that chance.

In the mall I was able to buy a SIM card for my iPhone, I now have access to the Internet at a decent speed. It’s not fast, but waaaay faster than what I’d been using up until now. I also bought some personal items in stores that don’t exist in the U.S. If all you saw was the mall you’d think Windhoek was a bustling European city. The mall was packed and money was being spent. Stores were museum neat, walkways were shiny as glass and there was plenty of anything you might want. A stark difference from the poverty we drove through. I suppose that our Peace Corps hosts were making a point.

Anyway, we’re back at the compound with new stuff and a lot to think about.