There are still many places on earth where light pollution hasn’t blotted out the stars, I’m glad to be in one of them.

One a clear night, like tonight, there are so many stars out that it’s hard to see some of the constellations. Orion is always the easiest to recognize, but others get lost in the speckled immensity of the Namibian night sky.

The Milky Way is easily seen as a smudgy swath of luminance bisecting the night. Looking at it makes it hard to believe that the smudge is the cumulation of millions of suns so far away that their individual light, dimmed by unfathomable distances, can only be seen as a tiny pinprick.

The Milky Way as seen from my backyards

Those bright spots are set in a sea of black. At least, we see it as black, but in fact, it is filled with energy that we are shielded from and can only perceive with the aid of our technology.

But I don’t care about that. I just enjoy looking up and getting lost in the vastness of it all.

What’s also interesting is that aircraft of any type is rarely seen over many parts of Namibia. I’ve been at my site for eight months and I’ve seen only one aircraft, likely a jet flying so high that its flashing running lights moved slowly against the starscape. 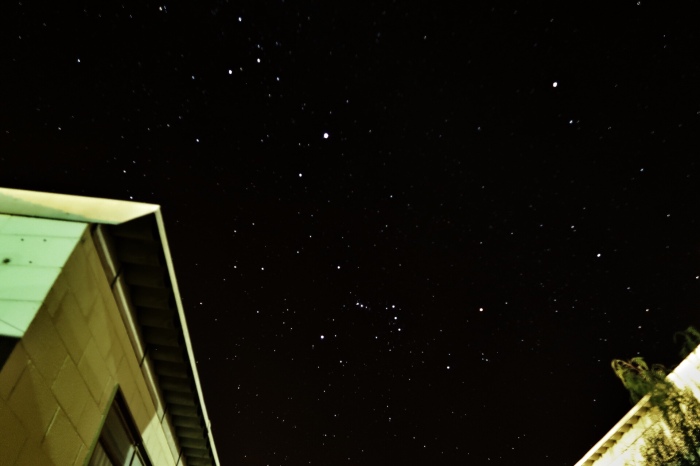 Orion Constellation (the three stars are the belt)

That’s not to say that I don’t see interesting things moving around in the sky at night. I’ve seen several meteors and a flock of relatively low flying birds. All a lot of fun to see, but the weirdest thing I’ve seen is what I call a brief battle in space.

While enjoying a beautiful night and view of the Milky Way I saw a series of bright flashes.

The first light, almost directly west of me, flashed then died, lasting maybe half a second. The second flash was not as bright as the first and dimmed slower. Maybe a second and a half. It was to the right of the first by maybe 1 degree.

Then another light way to the right about 15 degrees flashed like the first but not as bright. It flashed again about 2 seconds later, then went dark.

The last light was in the vicinity of the first but more to the right by about 5 degrees. It flashed for a second then died away.

That was it. The whole show lasted maybe 15 seconds. I watched the area for another 20 or so minutes, but no more flashes occurred.

Alien space ships zapping each other to smithereens? Americans and Russians duking it out in low earth orbit? Distant stars going nova in sync? Your guess is as good as mine. I saw lights flashing, you take it from there.

The weird flashes, the Milky Way, the gazillion stars. The night skies here are amazing.