As I’ve mentioned in Part One of this post, The Zambezi Region was fabled to be rich in wildlife and foliage. After spending my first year in the Namib Desert, I was looking forward to some lush greenery full of chattering, chirping, squawking, grunting, roaring animal life. I am from Florida, though not a native, year-round greenery has become part of my DNA.

Don’t get me wrong, I love the desert, but I do miss the rain.

So, it seemed a good omen that it rained the first night we were there. It was a light rain, lasting maybe 15 minutes, but to a man from a land where rain can be a daily occurrence, that drizzle was a godsend.

The next morning was cool and sunny, and me and my media pals went to work documenting Krissy, the Peace Corps volunteer assigned to the remote village we’d traveled so long to get to.

There were many things that didn’t quite jive with what I’d been told about the Zambezi Region. Yes, there’s water, lots of it, in fact. The Zambezi River was maybe a kilometer from the village and even in the dry season, which it was during our visit, the river is wide and deep. But I wouldn’t consider the area we were in lush. In fact, while there were certainly more trees around, I’d say it was sandier than the desert I’ve lived in for the passed year. And far more hazardous.

On the first night there Krissy warned us not to go barefoot, “There are spikey things everywhere.”

In the Namib, like in the deserts in the southwest U.S., plants tend to have thorns or spikes. Cactus is what most people think of when calling to mind a spikey plant. In the Namib even the few tree that there are have spikes that would put the thorniest cactus to shame. Branches are covered with inch long sewing needle sharp spikes that could easily puncture flip-flops and even some running shoes. But those spikes are relatively rare on the ground, and when they are you can normally see them before stepping on them. Where we were in the Zambezi Region, thorns and spikes are far more insidious, they are buried in the sand. No matter where you step you will almost always step on something sharp. The only saving grace was that most of the spikes and thorns are relatively small, not long enough to go through an average pair of flip-flops. But they do get stuck in the flip-flops. I spent many mindless minutes pulling thorns from my sandals and wondering how was it possible that the kids in the area can go barefoot without pulling thorns from their bloodied feet after every stroll. 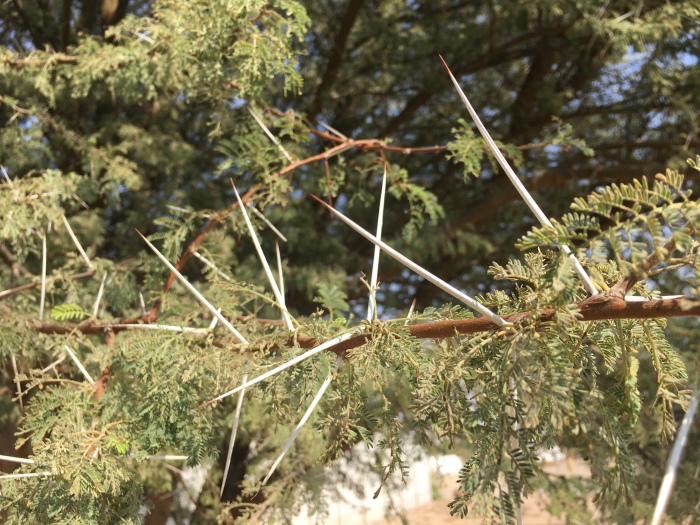 And if the thorns aren’t enough, check out these eye-stabbing beauties…

Video: These could’ve been in my foot!!!

I mentioned that the Zambezi River is a short, thorny walk away. That doesn’t mean that there was plenty of potable water. People do use river for drinking water after its been filtered and boiled, but that’s not the normal situation. The village gets its drinking water from a borehole a few kilometers away. At the time of our visit, the pump that supplies water to the surrounding homesteads was broken and the only other source of water was from a private borehole within the village. The owner sold water to his neighbors for a relatively small amount of money, but he did charge. So, a morning and evening ritual for most homes was fetching water from the neighbor.

I have a full 100 liter tank the Peace Corps requires us to keep and I struggle to move it. Kids in the village half my size haul 25 liter tanks of water as part of their daily chores.  Women magically balance those tanks on their heads and walk over terrain I stumble over without a load. Even our host, Krissy, had to fetch water, but she had the use of a wheelbarrow. Even so, it was not work for the weak. (Try hauling 75 liters of water in a wheelbarrow through loose sand. Should be an Olympic event.)

If you can get pass the buried spikes and water hauling you start to see Zambezi for what it really is. Beautiful. Our days there were warm, breezy and bright, and night were cool and crystal clear. I’ve seen the Milky Way often enough in my town, and I’m still blown away by the view. Where we were in Zambezi there far fewer lights at night and the sky was so full of stars, the Milky Way so bright I could actually see my shadow from it.

Then there are the people. They are kind, generous, hardworking and everything I’ve come to know what Namibians can be. I live in a mining town and it is a melting pot of cultures, languages, beliefs and much more. It is also driven by the quest for money. That quest becomes all encompassing and often overrides what innate ethics Namibians have. For instance, often when people in my town learn that I’m an American (Because of my skin color most initially assume I’m Namibian and ask what tribe I belong to.) it won’t be long before I’m asked for money. It has gotten to a point where I don’t like to be social because people will assume I will pay for their drinks, their food, and more. In Zambezi people are will give you things, are quick to help, and are very curious about who you are and where you are from.

I also found that in Zambezi, and it’s likely true is most regions in the north of Namibia, people adhere closer to their tribal culture which includes singing and dancing at functions. There wasn’t a day that went by during our stay that we didn’t hear some group singing and people, even adults, are likely to break out in a dance if they hear a good beat.

Boys leaving school. One of the school building is on the right, our tents on the left.

By American standards, the village we were in might be considered poor. Homes had no indoor plumbing, some had no electricity. Cooking was done over an open fire and homes are made of mud with thatched roofs. But it would be wrong to think of these folks as being poor. They have everything they need, though some things are a bit harder to get and maintain than others. For instance, the village school stay open at night so students can study in the electrically lit classrooms, and teachers are on hand to help and answer questions. Parents and teachers get together to discuss how best to educate the kids. There are well attended parent/teacher meetings too. Even by those who don’t have children in school will attend.

Me with some of the local boys who was curious about movie making and photography.

The village residents earn their living primarily from the river through fishing, or by farming. It is a much simpler life, devoid of the urban bustle that will stress even those born in it. Here, one can understand the term, “Namibian time” to mean that life doesn’t have to be rushed to be well lived.

After 5 full days of filming, photographing and interviewing, our team was ready to leave. Sleeping in a tent while there was not the best experience. During the day the slightest breeze blew fine sand into our tents no matter how tightly we buttoned everything up. I had the shake out my sleeping bag nightly before going to sleep, but by the third day I was was just trying to shake out the heavier grains of sand. The fine sand gets into everything and it’s useless to try to avoid it. 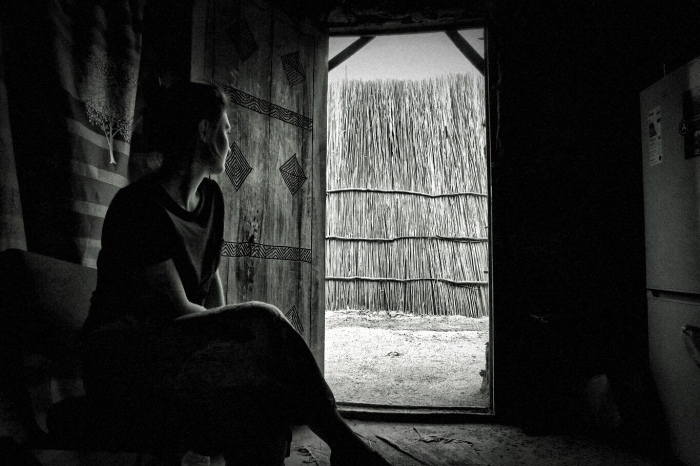 Even my camera was affected by the ultra fine dust. I have a Canon GX-7 Mark II, an excellent travel camera. Almost all the photos you’ve seen in this blog were taken with it. The only downside is that the camera isn’t dust proof. It had survived the Namib with only a few particles getting into the lens, but Zambezi proved too much for it and the automatic lens cover jammed. When it finally freed itself after repeatedly turning the camera on and off, it left a sizable scratch on the lens. Luckily it doesn’t affect most of the shots I take with the camera, but you can tell its been through a lot.

The day came to leave Zambezi behind, and while we were eager to get back to a bed with less sand and a real shower, I, for one, felt a bit sad to leave. We had scaled and baked fish fresh from the Zambezi River over an open fire. We had bathed outside in a stall made of sticks. We had watched the local youths perform a native dance. We had slept on lumpy sand under the stars. We had lived among people who loved their life, their community, their culture. And we had witnessed how a Peace Corps Volunteer can be truly integrated in an environment so different that many back home just could not handle it.

Sun setting on the Zambezi River

Our trip back to our sites were fairly uneventful. Elephants and other wildlife remained hidden from us. I still have several months left in my service. Maybe elephants are still in my future. This is Namibia, after all, you never know what’s beyond the next rise.